Over the years, there have been many impersonators, but it is obvious that there can only be one. I am, of course, talking about Bonnie and Clyde’s Death Car. A little history lesson for those easily distracted by shiny things in history class: Bonnie Parker and Clyde Barrow were a pair of American outlaws, their crimes of choice mainly being robbery and murder. After a spectacular manhunt, Bonnie and Clyde were finally tracked down after a two year crime spree (Clyde’s record was a bit longer than Bonnie’s). This led to a famous ambush by police in Louisiana on May 23rd, 1934. The couple was driving that morning in a stolen 1934 Ford Model 730 Deluxe Sedan when they were gunned down by Texas and Louisiana police officers in a spray of over 160 bullets, 50 of which hit Bonnie and Clyde, the rest riddled the car.

Today, the bullet-scarred car is on display at the casino. 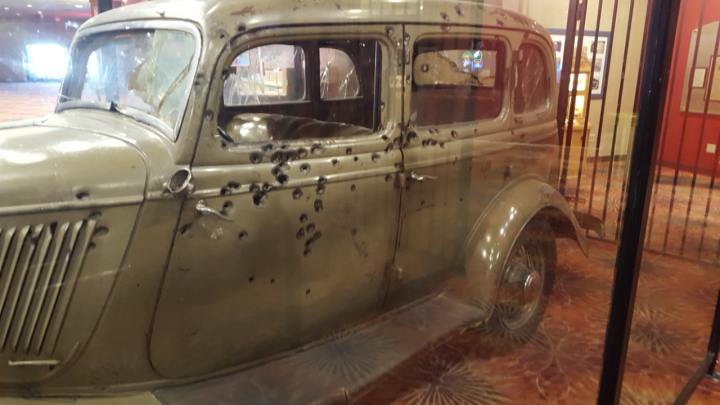 I apologize profusely for the quality of these images, but thick glass + flashy casino lights= bad photo op.

I also wasn’t sure if I should be shooting these photos because, from what I understand, it is illegal to take pictures in a casino (isn’t it?). However, with this kind of display, they have to figure it’s going to happen. I was also not the only one doing it, so safety in numbers, I guess.

Also on display at Whiskey Pete’s is the shirt Clyde was wearing when he died. In the display case next to it is a certificate of authenticity.

What I want to know is who washed all of the blood off of it?

Next to Bonnie and Clyde’s car is a 1931 Lincoln which once belonged to Dutch Schultz, an East Coast mobster murdered by “the commission” a year after Bonnie and Clyde’s deaths, and afterwards bought by Al Capone. It is a custom built job with bullet-proof, lead filled doors and inch thick glass. 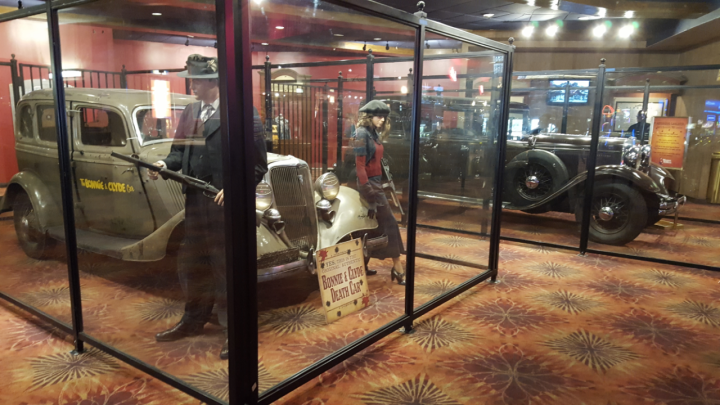 The car was never involved in a shoot out; the bullet holes you see are apparently from a recent owner hoping to add a little edge to the display. Lame.

But the car is still cool to see.

Hone up on some good old-fashion crooked history. Viewing is free, but depending on your temptation-resistance level, walking into a casino to see it might not be.