When the words “road trip” enter any American’s mind, the first route they think of is Route 66, a former highway that stretches from Chicago, IL to Los Angeles, CA. In its heyday (1930s-1960s), all along this iconic road were mom and pop businesses such as restaurants, shops, and motels.

Since then, it has been demoted from United States highway to scenic byway and has lost a lot of commercial appeal. The nostalgia still remains, though, and some memorabilia and even businesses of its past era have lingered on.

One of these famous Route 66 landmarks is the GEMINI GIANT- 810 E. Baltimore St., Wilmington, IL. 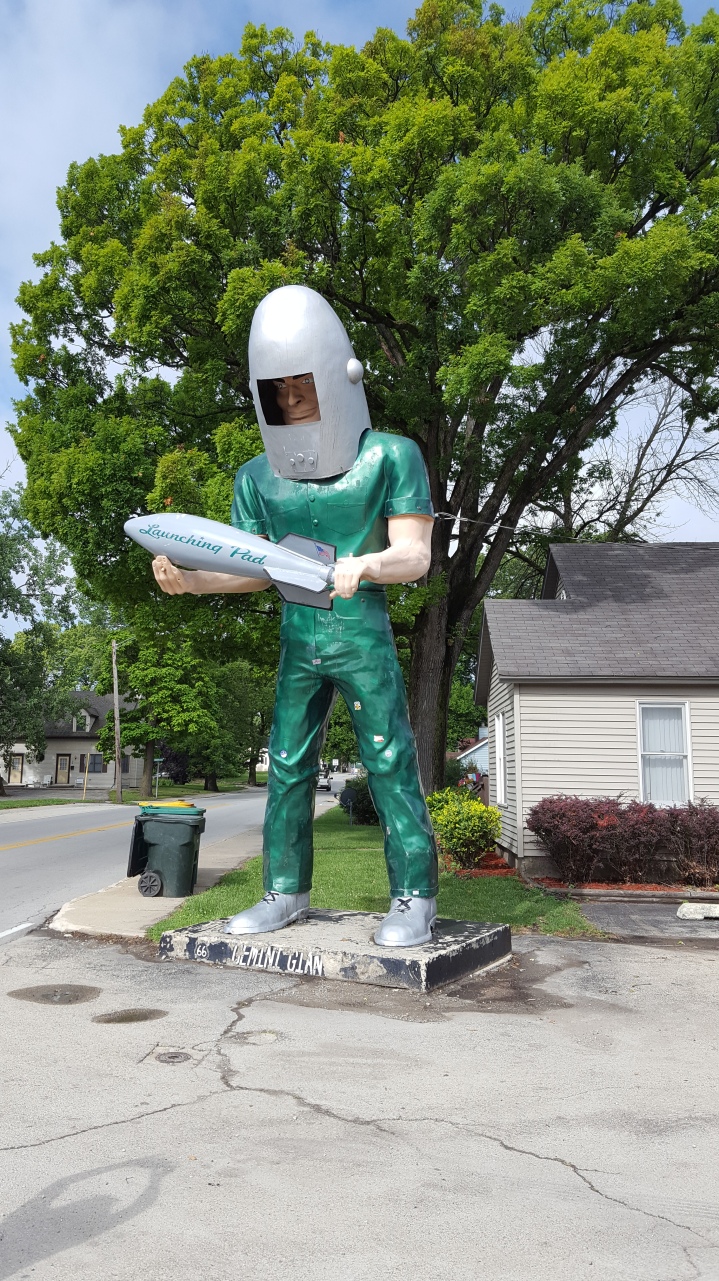 The Gemini Giant is known as one of the 1960s “muffler men,” which were a series of large, fiberglass statues usually used as advertisements. The original is Paul Bunyan holding an axe, and derivatives soon followed holding different paraphernalia to represent the business owning the statue, such as mufflers held by Muffler Man’s statues (hence the name). Almost all of these men have the same shape, having been made from the same basic mold: the head is tilted down slightly, the feet are shoulder width apart, the right hand is open and facing up, and the left hand is cupped or closed and facing down. The biggest difference between them all is the paint job and the shape of the object in their hands.

I so desperately want to find a mobster Muffler Man holding a baseball bat!

The big guy you see above was an advertisement for the Launching Pad Drive-In, cashing in on the space age craze from the 50s and 60s. The restaurant is unfortunately closed. The building stands empty and the lonely giant looks on as traffic trickles by into Wilmington.

From my research, the business and Gemini Giant are still for sale, the owner looking to sell both together. In all seriousness, I am so tempted to raise the money so I can buy it and restore it to its former 1960s drive-in glory. With the vintage craze, how cool would that be?

Who wants to go into business with me? Think about it, readers!