Fun fact: The 1993 film “Groundhog Day” starring Bill Murray and Andie MacDowell, which takes place in Punxsutawney, Pennsylvania, was not filmed in Pennsylvania.

Most of it was not filmed in Hollywood, either.

It was filmed in Illinois. Close enough, right?

Even now, almost 25 years after it was filmed (has it REALLY been that long?!), there are various plaques and PDFs of walking tours for the “GROUNDHOG DAY” FILMING LOCATIONS- Woodstock Square, Woodstock, IL.

Many of the notable scene locations are in and around this park, which is in the middle of Woodstock’s historic district.

There are other locations in the area. Some look a little different due to modernization and the like. Even so, the historic district is a quiet, cute area to walk around and take in life.

On my way out of town, I stumbled upon an unexpected bonus. A very short ways down the road, I happened upon this.

… which runs alongside of this… 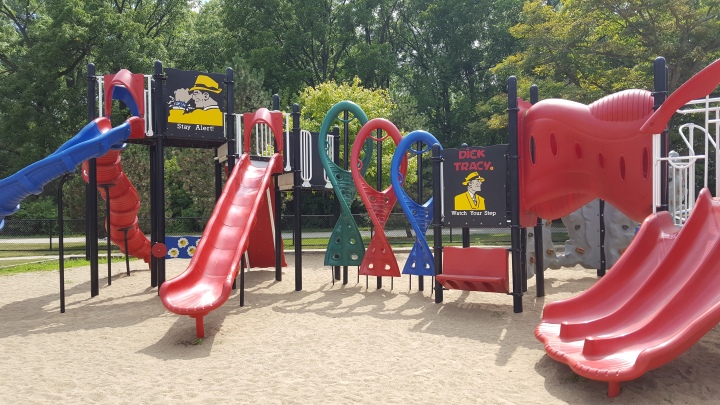 Dick Tracy, originally called Plainclothes Tracy, is a comic strip about a tough, ingenious police detective and is innovative uses of forensics and police procedures. Pretty much, every cop drama, story, and character of today would not be what it is without Dick Tracy, which was originally created by Chester Gould in the early 1930s…. in Woodstock, IL. Gould is also buried in Woodstock. For a while, there was a Dick Tracy Museum here, but it unfortunately closed in 2008.

Naturally, the Dick Tracy Way Park is right next to the Woodstock Police Department.

Woodstock is turning into an entertainment mecca of the midwest!

Woodstock is a little over an hour drive from Chicago and about an hour and a half by public transit.