Many cities have some sort of symbol or mascot. San Francisco has the Golden Gate Bridge, St. Louis has the Gateway to the West (aka The Big White Arch), Disney World has the big golf ball… and Wichita, Kansas has the KEEPER OF THE PLAINS- 650 N. Seneca St., Wichita, KS. 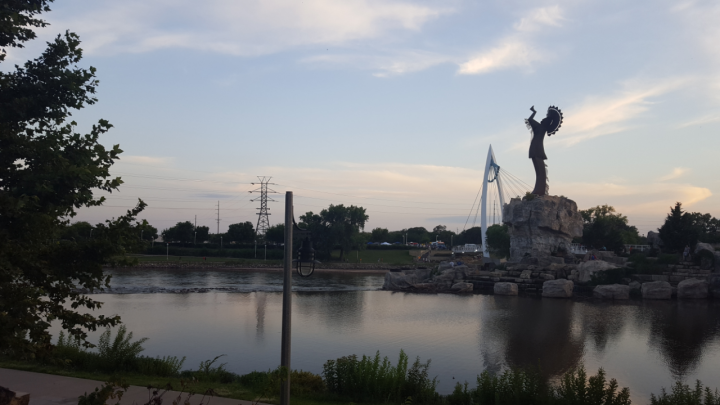 This 44-foot tall sculpture was designed by Kiowa-Comanche artist Blackbear Bosin in 1974 and has since become the most widely recognized Wichita symbol. He faces east, towards the rising sun, and stands at the convergence of the Arkansas and Little Arkansas rivers. This patch of ground used to be a gathering place for tribes. Now, it can be accessed by two cable bridges, whose designs are apparently inspired by bows and arrows.

Around the base and behind the sculpture on the bridge are displays of local Native American history and the various tribes from the area. For more information on their histories, there is also the nearby Mid America All-Indian Center.

The thing most people know the Keeper for is the ring of fire. Around the front of the base are several large fire pits which are manually fired up for 15 minutes every night (7pm in the winter, 9pm during daylight savings). Many people will gather on the river walk to watch the flames illuminate the water and statue.

The fire pits, I’ve been told, go farther around each side of him, but some were out on this particular night.

Still, the entire thing is a sight to behold in person.

As luck would have it, my hotel was practically right on the river walk, which is an easy way to access the Keeper.

…and also an easy way to trip over the masses of people with their noses in their phones, playing Pokémon Go. Like the Gold Rush, everyone was down by the river trying to collect things that don’t exist. Look up, people!

Someday, I do hope to return to Wichita and explore the museums and other cultural attractions the city has to offer. When you hear the name “Kansas,” you really don’t think of museums and culture, but it’s true. Just take a look at the Wichita government website.

After a full day of museums and taking in the city, enjoy a leisurely, sunset stroll down the river walk and watch the city’s tribute to its Native American past and present.