Greetings, lovers of the macabre!

… that’s macabre, not macrame, by the way. Look it up, if you can’t tell the difference.

I grew up watching Columbo, Perry Mason, Matlock, Unsolved Mysteries, and other such mystery shows. I was reading Agatha Christie regularly by the age of 10. When I played outside, a large portion of the time I was an amateur detective a la Nancy Drew.

My love for mysteries combined with my fascination for psychology naturally made me strangely (yet not creepily, I hope) curious about famous unsolved mysteries and serial killers. Because of this, I know perhaps more than the average person about infamous tragedies such as the murders of Andrew and Abby Borden in 1892 in Fall River, Massachusetts.

Those of you in the know understand the significance of the pear tree in front. 😉

Yes, this IS the actual house where the murders took place; no, this is not the exact furniture but rather replicas constructed from photographs; yes, you CAN stay overnight in the house; and YES, there are reports of paranormal activity in the house. In fact, as our guide informed us, between the size of the beds and extra cots that can be brought in, the house will sleep up to 20 people. The house can be rented out completely for $1500/night. Get 15 friends together and everyone pays only $100 each for a private ghost hunt. Who’s with me?!?

I do, in all seriousness, intend to return and spend the night someday.

The tour guide, Nick, showed us this paranormal evidence, provided by a visitor. One picture, of the window to Mr. and Mrs. Borden’s room, is an enlargement of the other.

See the face in the window? Creepy…

For those of you unfamiliar with what I am even talking about, here is a very brief history lesson: In the late morning of August 4th, 1892, the body of Andrew Borden was found in his sitting room on the couch, his face and head smashed repeatedly by what was later presumed to be an axe. When the house was searched, the body of his wife Abby was found in an upstairs guest room with similar wounds. The prime suspect ended up being Andrew’s daughter (Abby’s stepdaughter), Lizzie. She went on trial for the murders, but due to most if not all of the evidence being circumstantial, the jury found her not guilty. It has always been assumed that she did it, though, and Lizzie has been immortalized as the famous axe murderess, hence a popular children’s rhyme: “Lizzie Borden took an axe and gave her mother 40 whacks, and when she saw what she had done, she gave her father 41.”

… a bit of an exaggeration. If she did indeed commit the murders, she gave her stepmother somewhere around 19 whacks and her father about 10 or 11.

Nick was extremely informative and added personality to the tour. Despite what I already knew of the case, I learned a lot from the tour. 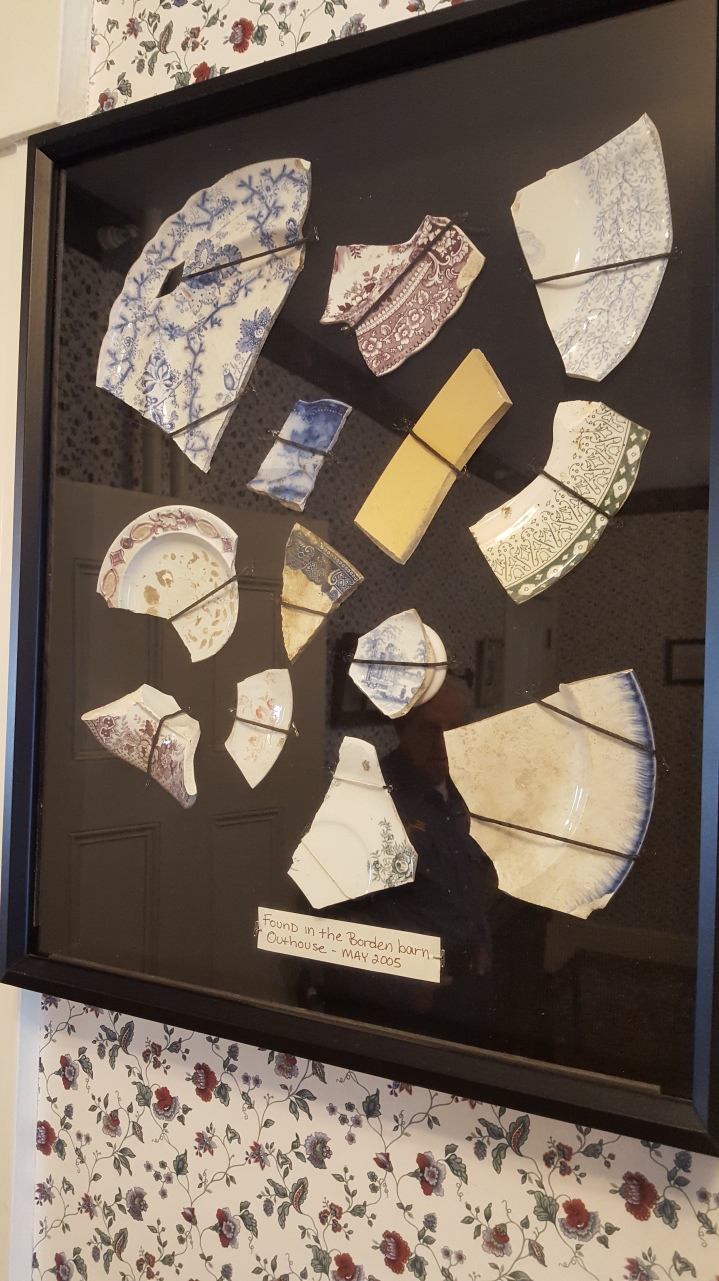 The dining room, where Andrew Borden’s autopsy took place (it WAS the 1800s, after all…) and my awesome tour guide, Nick. 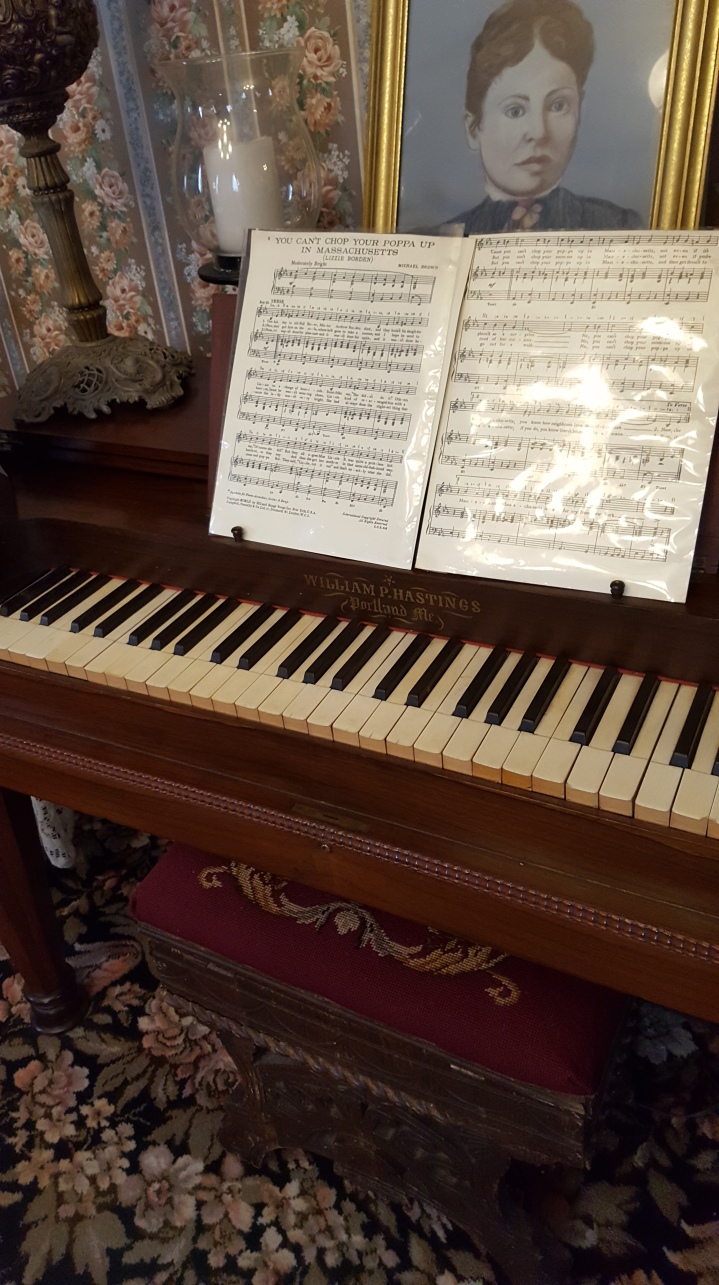 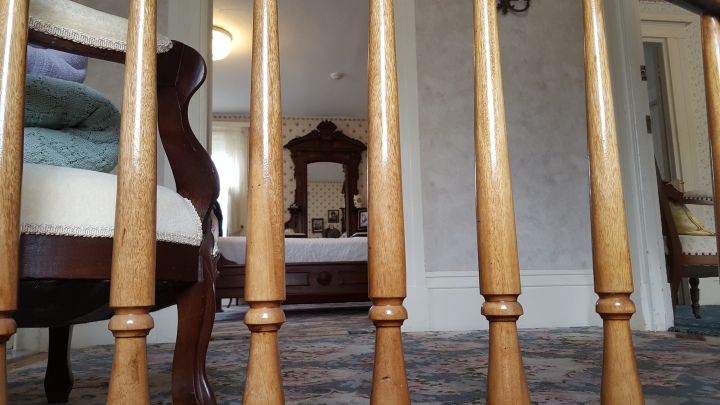 The view from the stairs from which the maid and the neighbor saw Abby Borden’s body partially under the bed. 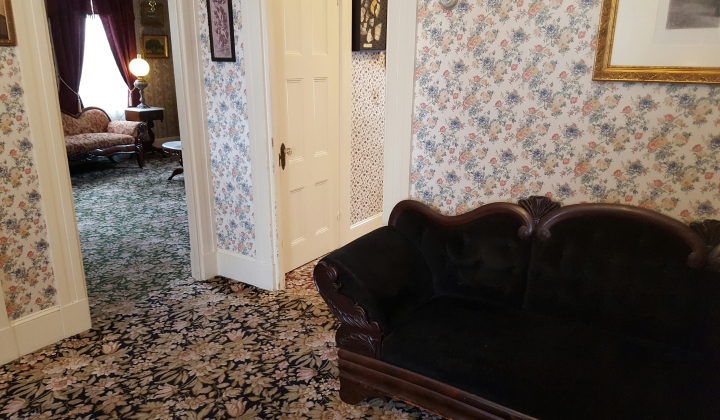 Where Andrew Borden’s body was found. The crime scene photo was taken from this almost exact angle.

Yes, crime scene photos. They do pass around a couple gruesome photos for viewing. If such things make you queasy, just don’t look.

There is a gift shop on the property in what was probably the carriage house, where they sell t-shirts, DVDs, and whatnot. They also have some wicked fun Lizzie Borden bobble heads of her holding a bloody axe. I almost invested in one, but stopped for two reasons: 1) not sure where I could put it in my car where it would not turn into a projectile in the event of air bag deployment, and 2) … as weird as this all sounds, I’m not positive she did it, and felt strangely disrespectful in that particular moment wanting to buy one. Now… it’s very LIKELY she did it, but not confirmed.

Now I want one. Surely Lizzie would understand my motives: I just think the bobble head is fun. Perhaps when I go for that overnight trip (alone or toting 14 friends).