Apparently, most of my favorite people to visit are dead. Perhaps that is because they don’t run away when you approach or mutter things about fish and visitors.

Today, I visited author Howard Philips Lovecraft at the SWAN POINT CEMETERY- 585 Blackstone Blvd, Providence, RI. H.P. Lovecraft, as he is better known, became notable only in recent years and after his death. Lovecraft is known for his horror and weird fiction, his most notable works including The Call of Cthulhu, At the Mountains of Madness, and other such works. He has been credited to influencing many modern authors such as Neil Gaiman and Stephen King.

If YOU are a Lovecraft fan and want to pay tribute, I will try to describe my route to his grave as best as I can.

First, enter the gate, as one should do when trying to visit any cemetery. 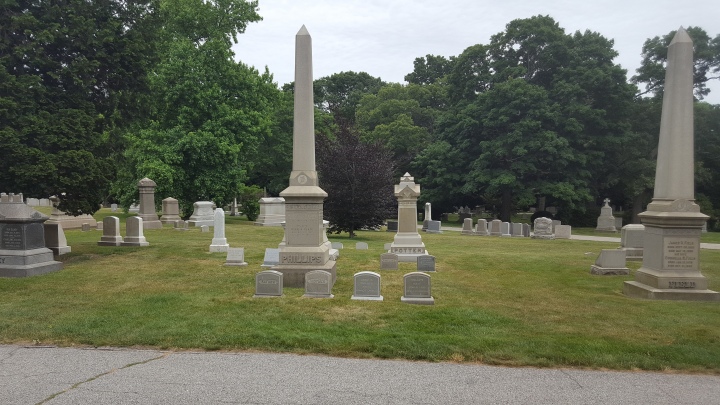 Seemingly insignificant, but this is the family plot. H.P.’s gravestone is directly behind the tall Phillips monument.

See it back there? Perhaps this will help.

This was the first gravesite I went to that had other visitors at it at the same time as me. A white Honda Fit slowly left the area as I parked. Later, as I was trying to find my way out, we circled each other at the Barnaby monument like a cartoon chase scene. These, apparently, are the Lovecraft fans.