We are still cruising some of the art in Grand Rapids, MI. It seems much of it (or perhaps much of the art that I find intriguing) is connected to some tidbit of history. In fact, this next one is almost within distant sight of the Water Fluoridation Statue.

It was funded by the Labor Heritage Society of West Michigan, created by Roberto Chenlo with Gregory Scott designing the landscaping architecture, and unveiled in 2007. The art represents the Furniture Strike of 1911, an event that Grand Rapids feels was a major force in their city’s history. The strike lasted 4 months and, despite the workers being forced to return to work due to economic hardships, the employers of the furniture warehouse union laborers did indeed shorten hours and increase pay. It also led to some changes in the power of government and employers over labor unions.

The woman represents the labor union workers’ wives supporting the strike and hiding rocks under their skirts to throw at the quitters. 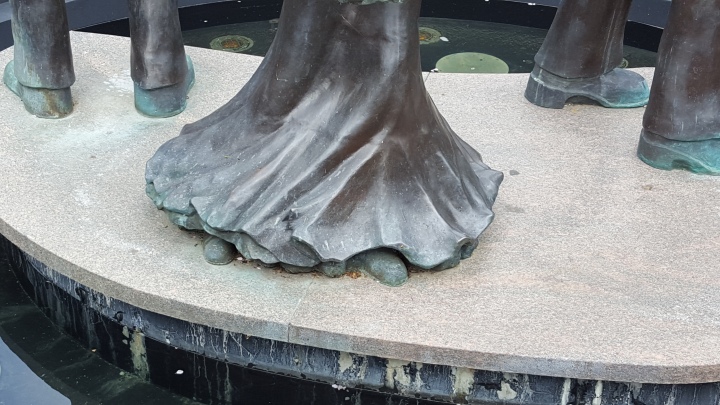 Yes, this apparently happened. The strike is said to have had very little violence aside from some broken windows and a few cracked heads (rocks will cause both of these things, in case you were not aware).

There are four pathways leading up to the statue, which represent the four main nationalities of the immigrant workers (Polish, Lithuanian, Dutch, and German). The water represents the Grand River running through the city. The granite surrounding the statue represents the fortitude and hardships of the workers and have inspirational/related quotes etched into them.

Art like this seems to be taken for granted, but it is important for educating us on where we came from and helping us understand the struggle it took to get to where we are today. We often times do not consider the thought that goes behind art such as this. Whether you believe that art is a viable means to make changes to the world or not, art like this is impressively thought out and executed. Most of us do not stop to consider these things nearly often enough.

Art also helps to pretty up a place, no?