I have embarked on my first road trip for this blog. Well, let’s be honest, it’s an excuse to drive to Pennsylvania and see my best friend, but that does not change what this means for YOU!

… well, “regular” is a relative term… let’s rebrand it as “a steady stream of blog posts.”

I collected several unique places to stop at along the way and set out on an offbeat attraction spree this morning.

And of course, what better way to start a road trip than a 9am visit to a cemetery?

Plymouth, MI is a city on the east side of the state that flies under a lot of people’s radars. Understandably so: I’ve lived in Michigan for most of my life and could probably count on one hand how many times I’ve heard anything about Plymouth. According to the Wikipedia page and http://www.plymouthmich.org, there appears to be plenty going on for anyone that finds themselves in the area. One place I had put down as an itinerary slot filler was the UNITED MEMORIAL GARDENS- 4800 Curtis Rd., Plymouth, MI.

United Memorial Gardens is an expansive cemetery (100+ acres) with flair.

My research tells me that the original owner and creator of the cemetery, Ed Wensley, had paddle boats in the manmade lake and hayrides around the paths, just to name just a couple of things he did to set his cemetery apart from those other boring ones. After Ed’s retirement, the new owners stopped the festivities, but the structural imprint remains.

First of all, I have to say that United Memorial Gardens has a large amount of out-of-the-ordinary gravestones and markers.

Many graves had stone benches as markers (and you’ll need each one, if you want to wander the entire cemetery. Then again, are you allowed to sit on a gravestone, even if it is a bench?!) and a lot of the flat markers were actual the full length of the grave (as opposed to that little rectangle at the head of the grave). Every section features sculptures or statues. 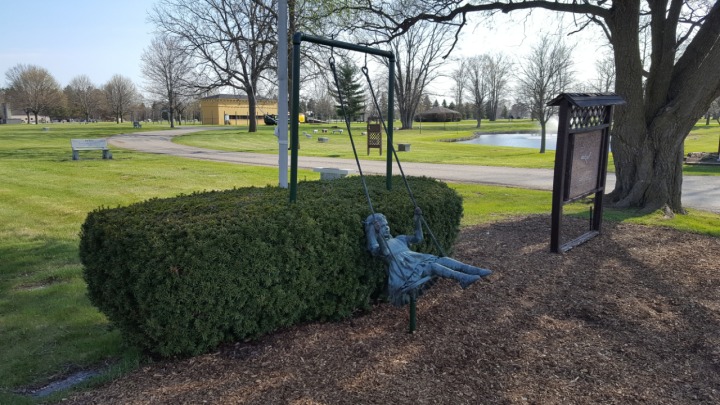 This one marks the section of and commemorates the victims of the crash of Northwest Airline Flight 255 in 1987. This is a depiction of the one lone survivor: a 4 year old girl named Cecelia.

Most of the sculptures and statues are expectedly religious in nature, such as the apostles or scriptural quotes. The Islamic Garden even has a large stone Quran.

…which I apparently forgot to take a picture of, so this one will have to suffice.

There are a couple of large mausoleums and a small chapel, which apparently held regular scripture readings until the new owners took over. One of the saddest sections is Babyland, which is a bit of a goofy name, but unfortunately conveys its purpose all too well.

There is a large building called the Tabernacle that, to be honest, I am not sure what purpose it serves as it was under renovation while I was there.

“The Facts of Life” section took me a second, but this Polish girl eventually figured out that it does not mark any actual graves, but rather warnings of seemingly questionable life styles and choices. 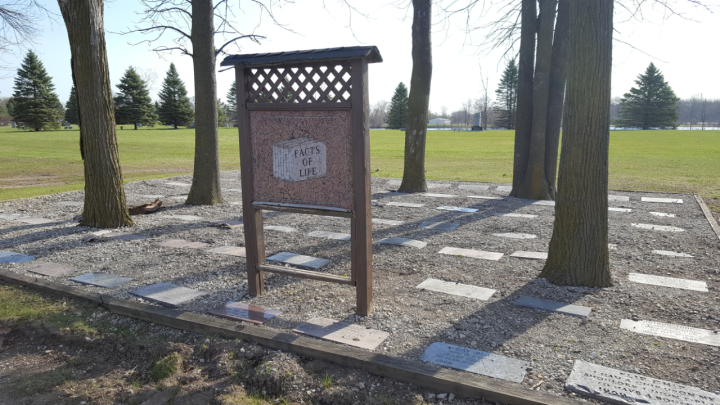 Who said a cemetery had to be serious about itself?

Yes, you can bury your pet respectably either in a plot or in a mausoleum. This building intrigued me…

I decided to try to door and see what a “Pet Rest Chapel” would entail. To my delight, it was unlocked. However, the glimpse of a small crematorium compelled me pull the door shut and scurry away.

I should mention that there appear to be plenty of plots available, should you be so inclined to want a final resting place with a bit of a twist.

If nothing else, when you find yourself in the Plymouth area, take a few minutes to stop by this interesting cemetery. After all, who couldn’t use a little fresh air?

One thought on “United Memorial Gardens”