We have already established that Route 66 is the quintessential road trip, as it is a destination and a journey all rolled into one. Because of this, there are many motels along the route that have been refurbished in keeping with the spirit of the classic that it was (and they were) 50, 60, even 70 years ago. The swallow (which is a bird, for those not in the know) is a symbol of coming home safely, as it was the first thing sailors would see while out at sea that told them land was indeed near. It is also symbolic of loyalty, love, victory, and overcoming hardship. What else would you want from a motel?

Besides a bedbug-free mattress, that is. Maybe a decent shower.

Like many Route 66 classics, The Blue Swallow Court, as was the original name, has a long history. It opened around 1940, then the name was changed to “Blue Swallow Motel” in 1958 and the sign pictured above was installed. When the faster Interstate 40 went in at the end of the 60s and took much of the scenic Route 66’s traffic (I-40 bypassed Tucumcari), many businesses were forced to close their doors, but some stuck out the hard times. The Blue Swallow Motel was one of them. The motel was listed on the National Register of Historic Places in 1993, and the recent resurgence of nostalgia has brought the business back up for current owners Kevin and Nancy, originally from Brighton, MI.

The motel maintains its 1950s charm in its design and decor, from the pink stone exterior to the chenille bedspread and the mid-century modern accessories. 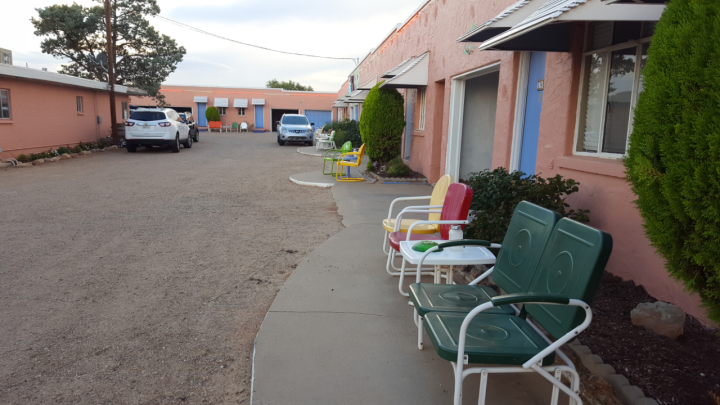 … with a few modern exceptions, such as the flat screen TV and wifi (but that’s invisible, anyway).

This motel, like my previous Route 66 stay Boots Court, has carports! As long as your car fits inside, your carport is free. Considering the size of cars in the 40s and 50s, I’m surprised ANYBODY could park inside. My little Honda was challenging enough.

Adding to the fun, the inside of each carport has some impressive artwork. 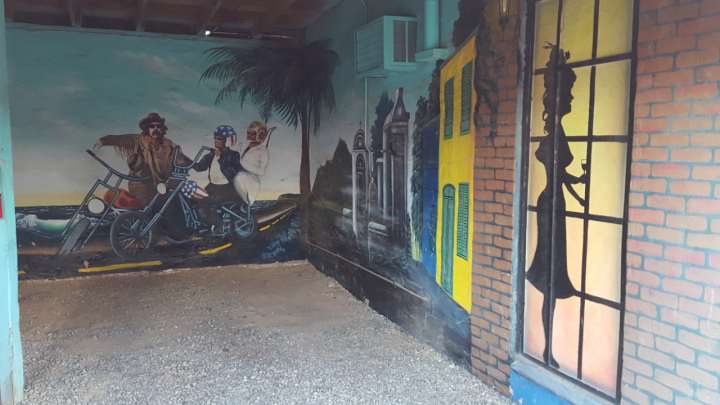 Of course, anyone with any experience knows that the best part of staying in a classic Route 66 motel is to sit outside, watch the Route 66 traffic pass by, and wait for the neon to pop on.

The Blue Swallow is also nearby many local businesses, including souvenir shops, restaurants, and other motels to walk by and look at (I was able to walk to the grocery store as well to get my kinky- I mean, my pink cocktails). A motel next to the Blue Swallow (it appears to be no longer a motel, but the rooms are all still on property) has a sign out front stating that Clint Eastwood stayed there. It looks like the office has been converted into a souvenir shop, maybe?

Head towards Tucumcari and spot the swallow up ahead, knowing that home is near.