We all know that, with celebrities and notable people, “they die in threes.” When all three happen at the same time and place, it is even more tragic.

Such was the case on February 3rd, 1959 when a plane crash took the lives of pilot Roger Peterson and music legends Buddy Holly (“That’ll Be the Day,” “Peggy Sue”), Ritchie Valens (“Donna,” “La Bamba”), and The Big Bopper (“Chantilly Lace,” “Beggar to a King”).

This day has since been labeled “The Day the Music Died” by Don McLean in his hit song “American Pie.”

In the middle of the cornfields of Iowa is THE PLACE THE MUSIC DIED aka BUDDY HOLLY’S CRASH SITE- Gull Ave. and 315th St., Clear Lake, IA. 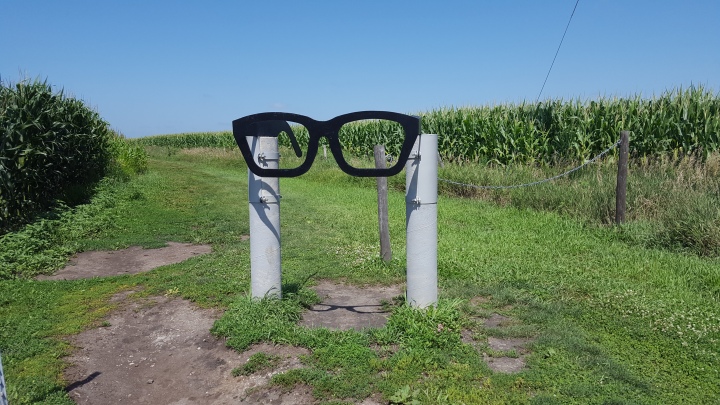 The telltale Buddy Holly glasses sit at the trailhead, which starts at the gravel of Gull Ave. Though there is not an official parking area, there are plenty of places to pull over and little enough traffic that this is not a problem.

When I say cornfields, I mean cornfields. On the other side of that chain is this. 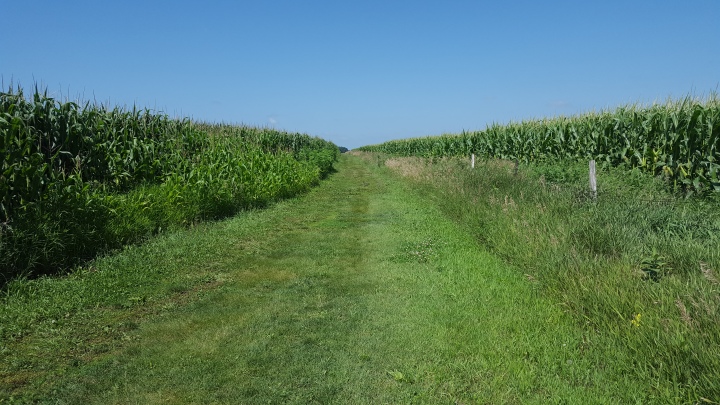 Don’t be intimidated. The walk to the site is only 6-8 minutes, and the trail gets a little muddy in places, but the mud can be sidestepped. Because of the remoteness, it is actually a very peaceful walk. There is the distant sound of traffic, but predominately are the sounds of the wind, rustling corn, and buzzing insects. Along the way, I was accompanied by butterflies and grasshoppers. It was borderline ethereal.

At the end of the long path is the actual crash site, where a memorial has been erected and visitors have left mementos such as coins, small dolls, flowers, and other random items. 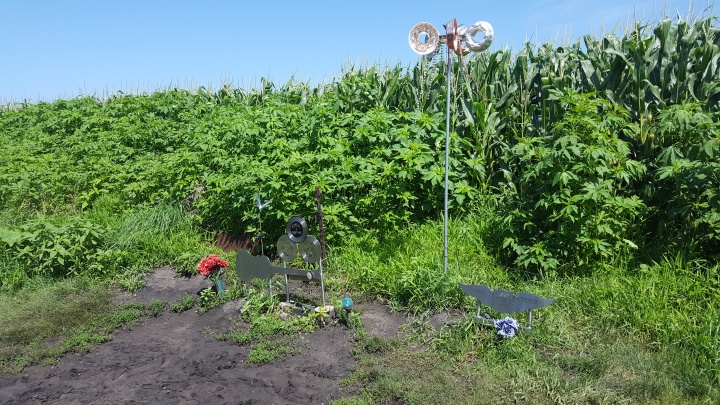 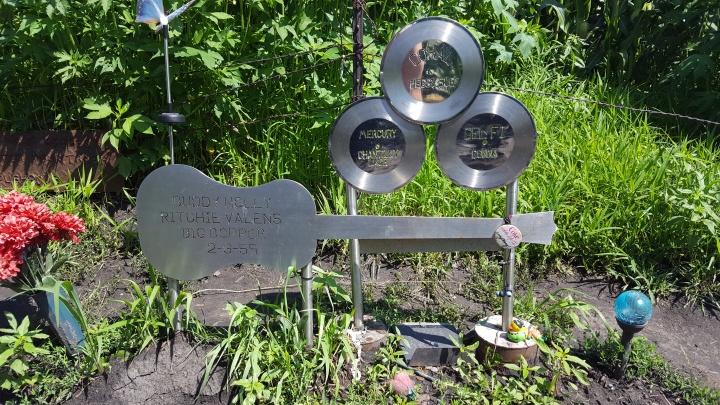 Regular readers know I like to leave things on graves as well. Though this is not a grave per se, I wanted to leave something. The green beads on the wind spinner pictured above were given to me when I went through the Museum of Historic Torture Devices in the Wisconsin Dells. I had them hanging on my rear view mirror this whole time and, to be honest, I didn’t really like them there. This seemed an appropriate place to leave them (though they went all the way from Wisconsin down to Louisiana and back up again just to end up one state kitty-corner away).

This appears to be private property, which the owner has graciously allowed fans to pay respects, so please pay them respect as well by not littering, vandalizing, urinating, or any other such… things (it’s sad, but unfortunately people do things like that… like I said before, it’s thanks to those kinds of jackals that The Goonies house is pretty much off limits).

So while in Iowa, have a moment of silence at the site where the music died.