Do exactly what I tell you to and nobody gets hurt!

For those interested in standing on notorious ground, and if you happen to be in Iowa, you must visit the MONUMENT TO THE FIRST TRAIN ROBBERY- 1469 White Pole Rd., Adair, IA. 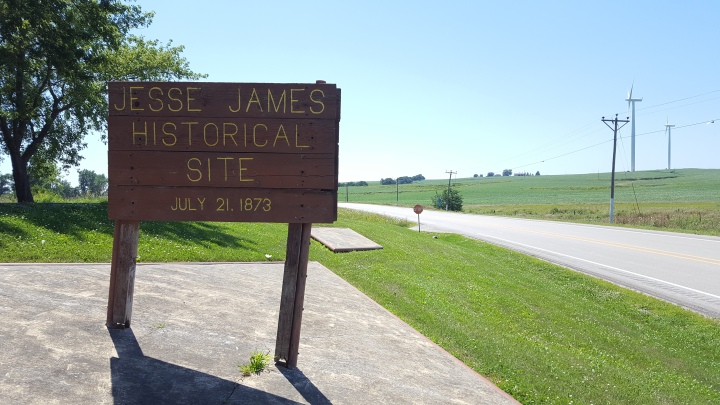 As you can see, it was committed by the infamous Jesse James and his gang.

On July 21, 1873, a train carrying $75,000 was scheduled to pass through Adair on a new train line. Jesse got wind of this, and he and his gang rigged the train track so they could easily derail the train when it came through. The engine went into the ditch and killed the engineer, the fireman (he died later from the injuries), and injured several passengers. When they forced the guard to open the safe, they only found $2,000. It turned out the gold shipment was delayed. They took that money and another $1,000 from the passengers. Because of their eluding officials after this robbery, the governor of Missouri issued a $10,000 reward for Jesse’s capture. Several years later, Bob Ford, a new member of the gang, wanted the reward, so he killed Jesse James in 1882.

… or did he? As we learned in a previous post, there is a possibility that Jesse macguyvered his way out of that.

The monument is a simple pull off from the road and is surrounded by rolling fields and modern windmills, but still makes a good photo op for you history buffs.

Stand where Jesse James stood and learn the lesson he learned that day: do your research thoroughly before derailing and robbing a train! Or simply don’t do it, that would probably be a better lesson.