But not just any castle… an unusual castle with an unusual story. Let’s go to the CORAL CASTLE MUSEUM- 28655 South Dixie Highway, Homestead, FL.

On the way into the castle, the worker leading me pointed to a lizard in the grass and told me that in the 1990s, Hurricane Andrew destroyed a reptile dealer’s house and released all of his animals, introducing several species of reptile to Florida. This included the orange-headed agama, which now are rampant in the area, to which he was pointing. 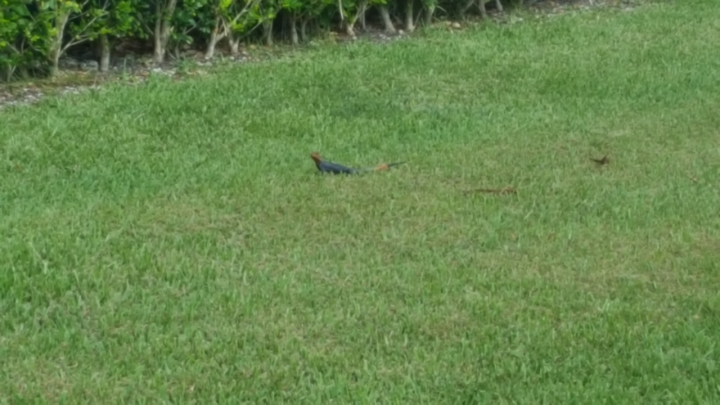 One look inside the castle and I knew it would hold some just-as-bizarre stories.

They run continuous tours throughout the day, which take about 40 minutes. The guides basically just walk the castle in a circle and talk, so you can join the tour at any point and you simply follow along until you come to the point you joined in. My tour guide, Ken, did an amazing job painting the picture of what we know of the castle’s story.

The BASIC story is this: the original coral castle was finished by heartbroken Latvian Edward Leedskalnin (heartbroken because he was jilted by his fiancee back in his homeland the night before their wedding) around 1920 in Florida City. In 1936, parts of the castle were moved or rebuilt in the Miami/Homestead location. Here’s the kicker: Ed was merely 5 foot tall, weighed around 100 lbs., worked completely alone with rudimentary tools. He built at night and the Miami location originally was surrounded by thick woods. Nobody ever saw him work… he never wrote anything down. Nobody knows how he carved and manufactured the insanely heavy, incredibly durable coral. To this day, many theories are put forward, but nobody knows for sure.

His creation is incredibly creative, including:

They do have some of his tools, though, which I’m sure many of you are thinking “oh, well, that will tell you right there how he did it.”

These are the only clues we have, and though it does explain some things, a lot of the process is still a mystery.

The sad part of this story is he clearly built this castle with a wife and family in mind. Ed died in 1951 as a bachelor.

Visit this unique and impressive piece of art, maybe squeak your mental gears into action and solve this mystery.