Dear lovers of the obscure,

Chicago, as we all are well aware, is a diverse city with sky-scraping businesses and suburban homesteads. Of course, it also has everything else imaginable in between.

Some of which is literal shit. 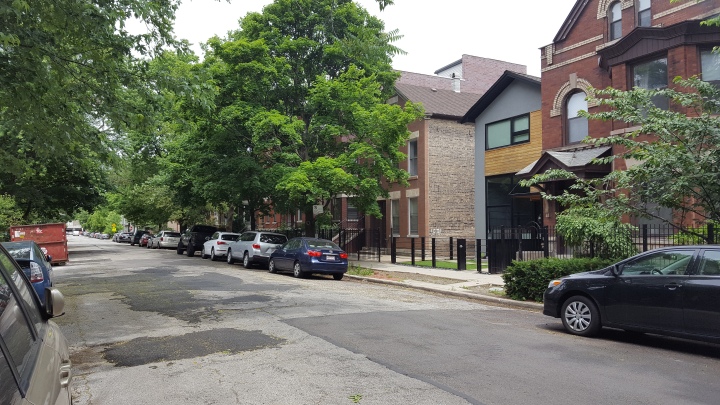 Not far from the above pictured street in Ukranian Village, several blocks south of Wicker Park, is a piece of art with a simple message. Though on private property, it is very close to the sidewalk and caused a little controversy upon its installation in July of 2005.

As you can see, it blends into the quiet, unassuming, architectural landscape of its surroundings, but upon closer inspection, one will find a lesser known attraction known as SHIT FOUNTAIN- 1001 N. Wolcott Ave., Chicago, IL.

Yes, it’s exactly what it looks like: a small, trickling fountain shaped to look like a pile of dog shit.

It was much more brown 11 years ago. The water makes it brown again, so it’s possible the fountain itself does not flow as well as it did when it was first created. Or it could be that, surprisingly, shit just doesn’t age well.

It was installed by Jerzy S. Kenar, a Polish native transplanted to Chicago (and known for his religious artworks, in fact), as a protest against the neighbors walking their dogs and not cleaning up the resulting excrement. Some people complained, but his message is clear: clean up your shit, it’s not pretty.

Take some time to slow down on your bustling Chicago visit; after visiting the farmer’s market at Wicker Park, stroll along this pleasant street for a random good laugh.

One thought on “Sh*t Fountain”