For those with the ultimate wanderlust, this next museum is for you.

For $3, you can see artifacts of this longtime tradition in an old, converted theater. This means you may have to bear with the photos, the lighting is a little low and I hate using my flash when there are glass cases.

It’s a hobo museum; if it had clean, white walls and fresh office carpeting, it would be weird.

Just to get things straight, a hobo travels to work. They are different from tramps (travel but don’t work; guess that’s me right now… that’s why the lady is a tramp!) and bums (don’t travel or work). Hoboes have great pride in what they do and some notable people have been among their ranks at some point in their lives, such as Red Skelton, Burl Ives, and my buddy Clark Gable.

Red Skelton and Burl Ives I can totally imagine, but Clark Gable? I may need to research that one further for confirmation and get back to you on it. UPDATE: According to that ultimate source of infallible research, Wikipedia, Gable was working in Akron, OH, and while working at different regional theaters, “made his way” to Seaside, OR and Portland, OR. My guess is, if he was hobo, it was around this time.

Hoboes also have the coolest names; some “famous” hoboes are The Pennsylvania Kid, Cinder Box Cindy, Fishbones, Connecticut Slim, Lord Open Road, Mountain Dew (named so because he only drank soda and no alcohol), Side Door Pullman Kid, Gypsy Moon, Songbird McCue, the list goes on.

The museum is a product of the Hobo Foundation, which was founded in 1974 by Steamtrain Maury, Hood River Blackie, and Feather River John. All hoboes themselves (did the names give it away?), they wanted to preserve hobo history and created the foundation based out of Britt. From this came the museum and many other attractions around town. 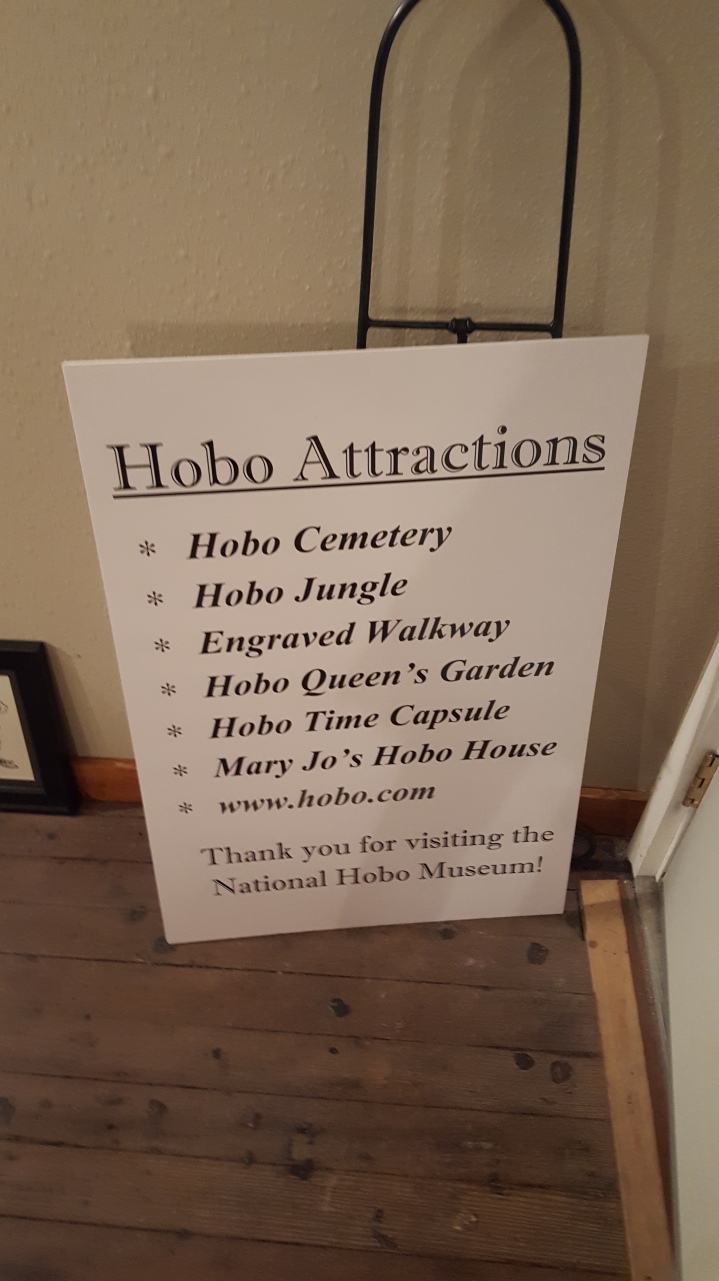 Yes, you read that right: Hobo Queen’s garden. There is, indeed, a Hobo King and Queen election at every Hobo Convention, which is held in Britt in August every year.

Honestly, I think it would be interesting to stick around and see that, but I have a feeling they would probably convince me to become a hobo myself. Travel all the time, work here and there, and meet other free spirited people? Hell yeah!

This is especially tempting after hearing about hobo weddings. According to the Buzzfeed article “61 Things I Learned at the National Hobo Covention” by Matt Stopera, the vows for a hobo wedding are: 1. You are the way you are, and it’s okay for you to be that way, 2. May my love for you always be greater than my need for you, 3. May I always do what’s right even if it’s not what I want, and 4. To help you be a success in your way.

WOW! Any single hoboes around?

In the back of the museum, there is a continuously running documentary on hoboing. It’s an hour and a half long and, honestly, you can get through the museum in a third of that time. If you do want to sit and watch it, there are the original theater seats in the front. Otherwise, the DVD’s for sale in the gift shop.

Go see this museum, then let it convince you to hop the rails, see the country, and attend a few conventions so you can throw your name in for Hobo King or Queen before you “catch the westbound” (…y’know, die).